The heart of the largest industrial electric fan in China, manufactured by BEJARM

Motor is a device that converts electrical energy into mechanical energy. For machinery, it is like the heart, providing surging power for its operation. Bejarm located in our district, is such an enterprise specializing in R & D and innovation of motor.

In the industrial district of Bejarm company, there's a huge fan hanging on the top of the factory building. The black part in the middle of the fan is a prototype of permanent magnet direct drive motor produced by Bejarm company for experiment and detection. "This fan blade is 7.3 meters long, 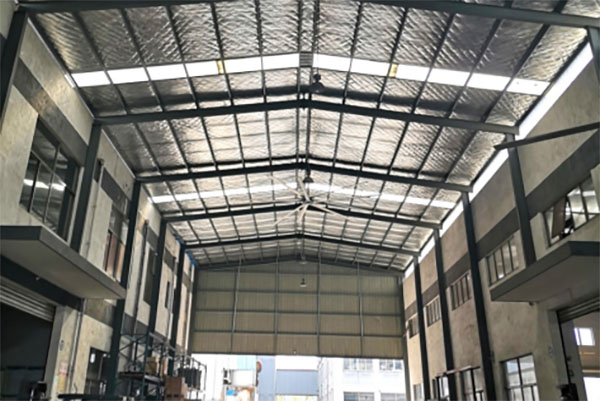 which is the largest industrial fan diameter in China, and the motor in the middle is very small compared with it." Compared with the big fan which looks like a "Big Mac", the black part in the middle is really insignificant, but it is the most important "heart" to drive the fan.

As the core part of the fan, its role is self-evident. In order to drive such a large fan, the motor should have been relatively large, including three-phase asynchronous motor and reducer, etc. But through technological innovation, the volume of the permanent magnet direct drive motor produced by the company is very small, but the "power" is not inferior. For example, this fan with Bejarm permanent magnet motor, installed at a height of more than 6 meters, can actually cover 800 square meters to 1000 square meters of space. People can feel the state of natural wind. Now it does not rotate like an ordinary household electric fan whose speed varies greatly. General household electric fan’s speed is very fast, but the wind may not that strong, and the rotation speed is so slow, only 50 to 70 turns per minute, but it has large air volume. The fan stirs up the air flow in the whole space, which can let the human body feel very comfortable because there is no stuffy feeling of simple cooling in the closed space.

Super large permanent magnet direct drive industrial fans can be installed in many environments, such as vegetable markets, supermarkets, indoor basketball courts, gymnasiums, industrial plants and so on. Moreover, the power consumption is very low, less than one degree per hour. Currently, through the preliminary test in Shanghai, Suzhou and Ningbo, the permanent magnet direct drive motor developed by Bejarm motor has obtained the performance of low noise and good effect, which means it has a broad market prospect and will be "promising" in the market next year.

The market of industrial fans will be very considerable next year, and the sales volume is expected to be 5000 to 10000. If we only look at the sales of motors and drives, it will probably reach 10 million to 20 million. In addition, many R & D teams of Bejarm company are simultaneously developing highly reliable and controllable power applications in many fields, such as smart water, wind power generation, industrial automation, lifting equipment (elevator), etc. It is believed that in the future, Bejarm company will make great use of more equipment to provide leading smart technology power.